Affordable housing is a major concern for millions of people, especially those living in large, crowded cities. Governments worldwide have implemented initiatives to address affordability, subsidizing both rents and housing purchase costs. But what do people actually need? Do they just need a stable place to live, or is it also important to own a property? What should be the focus of future housing initiatives? And how does homeownership actually affect a person’s life and sense of well-being?

The positive association between owning a home and certain favorable outcomes seems to be self-evident. However, proving causality can be tricky due to what researchers call the “omitted-variable bias,” as Miao explained: “Homeownership is often ‘wrapped’ by many unobserved factors, such as one’s family background, saving habits and even personalities.”

“It’s extremely challenging to distinguish whether a homeowner’s life satisfaction is the result of owning a property, or out of other factors using social survey data. For example, maybe homeowners are just richer than others, so they can afford the purchase, and their life satisfaction might largely come from their wealth. Thus an analysis of the effects of homeownership alone can easily be biased if other related factors, observable or unobservable, are not taken into account in a study.” 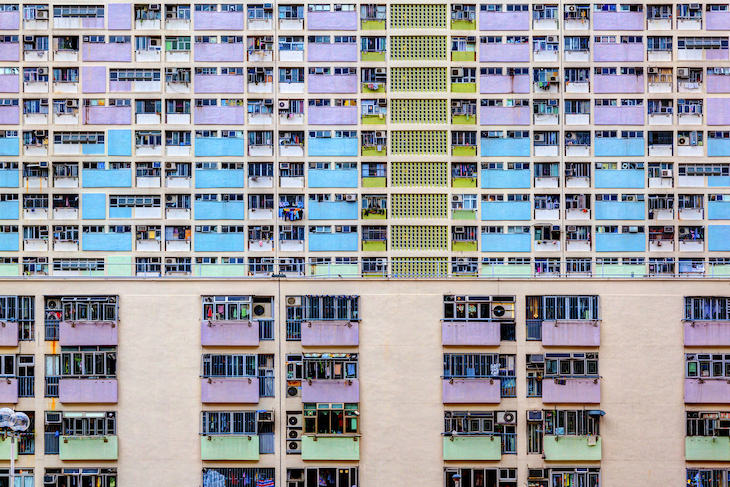 Miao and Wu’s team, who have been studying Hong Kong and collecting comprehensive social survey data on the region for more than a decade, realized that Hong Kong’s Home Ownership Scheme (HOS) – a subsidized housing ownership program in the city – could help to address the omitted variable bias in examining the causal effects of homeownership.

Under the HOS, which was introduced in 1978, eligible households could buy apartments from the government at 30–50 percent below market price and borrow up to 90–95 percent of the purchase price. Since the demand for HOS flats severely exceeds the supply, the Housing Authority holds lotteries  to determine who among the eligible applicants can buy a subsidized apartment.

“Hong Kong with the HOS in place appears to be an ideal quasi-experimental setting – it is not designed to be an experiment, but it works just like one,” Miao explained. “As the draw is purely random, statistically, we can say the ‘winning’ and the ‘losing’ groups are ‘equal.’ The only difference between the two is that the ‘lucky’ group of people become homeowners while the others don’t. The unobserved factors now can be offset. Thus, any statistically significant differences between the two groups can be examined as effects brought solely by homeownership,” said Miao.

Rather than taking data from ready-to-use databases, Miao and Wu’s research team collected their own data through the Hong Kong Panel Study of Social Dynamics (HKPSSD), a city-wide representative household panel survey their research team launched a decade ago.

Since 2011, HKPSSD has been tracking socioeconomic changes and their influence on daily life in Hong Kong by conducting surveys every two years, collecting responses from over 8,000 adults in about 3,200 households from across a broad spectrum of Hong Kong society. Miao and Wu’s HOS study analyzed four waves of data collected between 2011 and 2018, with each wave including an average of roughly 5000 adults from 2500 households. Throughout the collection process, the team put great effort into ensuring and sustaining data quality, such as meeting nearly every week to analyze the distribution and representativeness of the collected data.

Miao and Wu’s analysis adopted fixed-effects (FE) models and instrumental variable estimation to examine and compare life satisfaction and self-identified social status among homeowners and renters. The results from each analysis consistently showed that being a homeowner significantly improved life satisfaction and self-assessed class identification. The wide coverage of the data samples and random nature of HOS receipt guaranteed that the study results could be generalized to a broader population.

There has been a long-standing policy debate over the benefits of HOS in Hong Kong. The HKSAR government under its first Chief Executive, Mr. Tung Chee Hwa, once had an ambitious plan to increase the housing ownership rate to 70 percent by 2007, by supplying no fewer than 85,000 flats each year through the HOS. The plan was suspended in 2003 because of the Asian financial crisis, economic recessions, coupled with strong resistance from the powerful property developers and middle-class homeowners. The debate about the so-called “85,000 policy”, i. e., whether or not the government should intervene in the real estate market, has been reemerging as, since 2008, Hong Kong has become the world’s most expensive property market.

“Through the study, we provided causal evidence that outside its economic values, homeownership is also positively associated with senses of safety, belongingness, privacy, and self-esteem, which are all essentially emotional needs of human beings,” Miao said. “We hope this study can contribute to the policy debate and shed light on the effectiveness of housing policies in Hong Kong and beyond, providing scientific support for future initiatives that aim to promote homeownership.”

Miao and Wu said they hope that their analysis – the first study exclusively on Hong Kong to be published in the century-old Social Forces – can bring more visibility to social science research on Hong Kong, Mainland China, and East Asia more broadly. “This article exemplifies CASER’s commitment to conducting localized research that makes a global impact,” Wu said. “It takes advantage of the unique setting in Hong Kong to address a scientific question which has plagued the study of the causal effects of homeownership on socioeconomic outcomes in many other countries.”

“CASER at NYU Shanghai is in a unique position to combine local insights drawn from our work in Shanghai and other Asian cities with international real-world relevance on issues related to education, migration, population aging and health, and urban governance,” he added.