“The launch of CASER today is an important landmark for NYU Shanghai as a research university,” Chancellor Tong Shijun said. “I believe we will make greater contributions to addressing important issues related to regional and national development through social scientific research, in addition to delivering high-quality teaching.”

“I am proud that NYU Shanghai is making such a significant commitment to supporting some of the world’s best and most promising social scientists and to promoting cutting-edge analysis of the socioeconomic issues in China’s emerging metropolises,” said Wu Xiaogang, founding director of CASER, Yufeng Global Professor of Social Science at NYU Shanghai and NYU Professor of Sociology. Wu Xiaogang at the CASER launch event on Thursday

An internationally renowned sociologist, Wu has collected the first and most comprehensive household and neighborhood panel data on Shanghai, led the first city-wide household panel study in Hong Kong to track social and economic changes and the impacts on people’s livelihood from 2011 to 2018, and surveyed Beijing college students’ learning and social experience throughout their college years.

With Wu at the helm, CASER will bring together some 20 interdisciplinary faculty from across NYU Shanghai and the NYU Global Network, as well as 12 distinguished social scientists from other universities worldwide to conduct research in focus areas such as education, health, housing, inequality and poverty, migration, population aging, and urban governance. Their goal is to work with governments and NGOs to use these findings to develop effective policies to promote people’s wellbeing. The Center will also strive to become a key repository of customizable trend data of major cities in mainland China and beyond.

CASER will also serve as a key training and proving ground for the next generation of social scientists by offering summer programs, colloquia, seminars and conferences. The editorial office of the Chinese Sociological Review, published since 1968, will also be housed at the Center.

Over the course of a day-long launch on November 19, some 30 leading scholars shared insights on the development of sociology in China, discussing issues such as disciplinary boundary and interdisciplinary research, the challenges and opportunities in quantitative social science, and the applications of social research in policy-making. 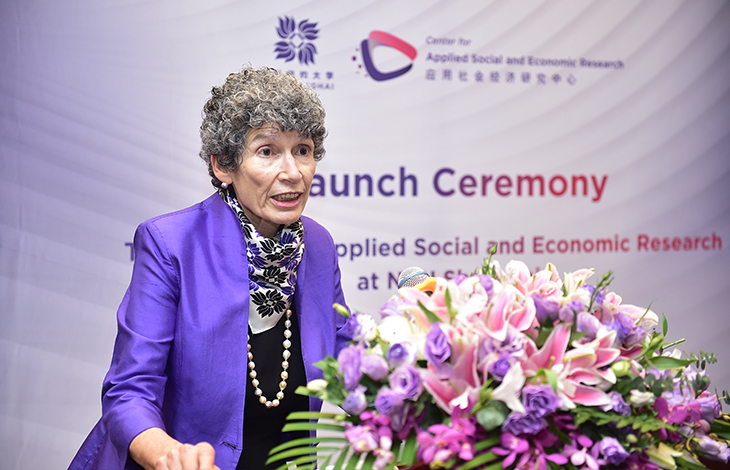 In a Zoom-mediated panel discussion in the evening, Wu unveiled the center’s inaugural project, “Life Experience and Community during COVID-19 in the United States: Infection, Isolation, and Economic Problems,” a study designed to complement the findings of a similar study CASER and colleagues at the Hong Kong University of Science and Technology conducted last spring in Wuhan, China, to investigate the role of community in supporting residents during public health crises. NYU Professor of Sociology Michael Hout partnered with CASER to survey a national representative sample of 4,400 people over the age of 18 across the U.S. between October 8-27, 2020, during a third wave of COVID-19 infection. The study examined the impact of the pandemic on individuals’ economic and social life, subjective well-being, perceptions and attitudes, and social participation.

Their data show that 20% of those surveyed had an infected member in their extended family, and 40% knew an infected person. Half the adults felt that the shutdowns were absolutely or very necessary, but many had reservations and 11% thought the shutdown in their community was not necessary at all. While 60% said they always wore a mask in public, 6% said they never did. Emotional reactions varied, but one-third felt isolated or worried. Females were more likely than males to report job loss or expected job loss. They were also more likely than males to encounter financial difficulty. Compared to senior citizens, young people were more likely to report mental stress and social isolation. Finally, highly-educated people tended not to think the U.S. was doing a good job versus the less educated. Highly educated respondents were more likely to approve of China’s response to the pandemic. 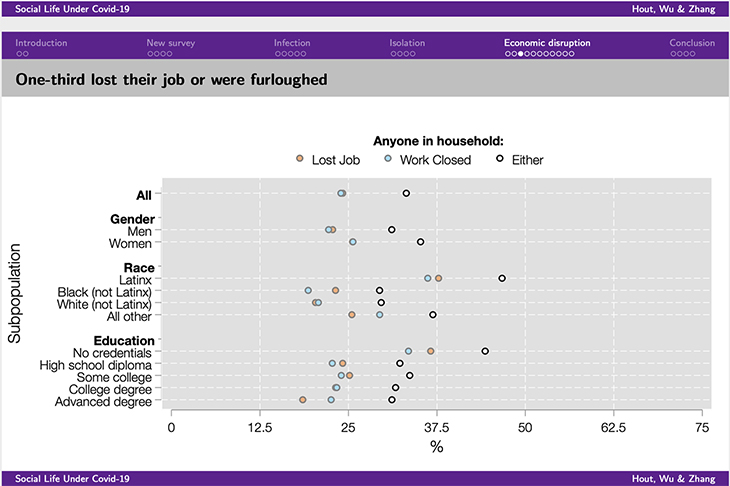 Their survey shows one-third of the respondents lost their jobs due to COVID-19 in the United States.

“I think it’s an exciting time to be a sociologist,” said Xie Yu, Bert G. Kerstetter ’66 University Professor of Sociology, Princeton University. He joined the panel discussion via Zoom. “At this time ideological beliefs are strong. Emotions are strong. It’s time to have data driven evidence based methodologically rigorous social science research everywhere, especially in China and the U.S. These two societies are facing many challenges. Academics like ourselves can make valuable contributions.”